Our Assessments Are Independently Tested and Validated for Accuracy 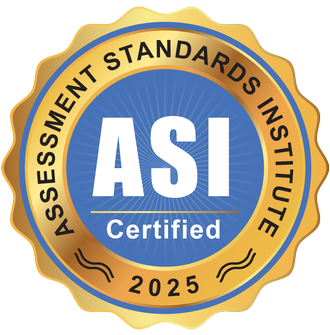 A recent review revealed a significant majority of assessments available today lacked the studies & reporting to confirm their accuracy. Of the small minority which claimed reporting, the significant majority of those were conducted privately; oftentimes by the assessment provider itself, rather than an objective and scientifically qualified third party. At Assessments24x7, we are leading by example in this otherwise unregulated industry. How are we doing this? By submitting our assessments to an objective, independently conducted battery of tests: Construct Validity, Reliability, and Disparate Impact - all by a qualified scientific authority (Assessment Standards Institute). Our goal? Ensuring the trust and confidence of our users by producing the industry’s most accurate and class protected assessments.

"…this DISC assessment has one of the highest Cronbach scores in the DISC marketplace. This is a significant achievement, and the attached updated version of the DISC Data Reliability report confirms the results... You should feel very good about the efforts to make the A24x7 DISC report one of the best in the marketplace." - Assessment Standards Institute

The Assessment Industry’s Past and Present

Assessments have been used since the mid-20th century, initially relied upon by Fortune 500s, calculated by highly skilled PhDs, and produced by only a handful of trusted developers. With the advent of the internet in the 1990s, the ability to produce, market, and sell assessments became exponentially easier and less expensive. Since then, it has developed into a kind of “global cottage industry” with hundreds of new assessment developers producing thousands of different assessments. Each developer purporting its assessments to be scientifically accurate instruments - sold, resold, and used by individuals and organizations of all kinds; including many of our largest institutions like Fortune 500 companies, major universities, world governments, and the military. Frighteningly, this “global cottage industry,” which produces data relied upon by millions, is entirely unregulated with nothing to ensure its consumers are receiving what they are being told and sold. There are zero requirements, safeguards, laws, or regulations ensuring the consumer receives a scientifically accurate instrument - or even what the developers and sellers claim.

The Assessment Standards Institute (ASI) provides our assessments with verifiably objective testing and reporting that meet standards set by the American Psychological Association (APA) and the Equal Employment Opportunity Commission (EEOC). This battery of tests is both voluntary and verifiably transparent. Our goal? To ensure this assessment’s professional merit and scientific accuracy for you, the user. These reports are readily available upon request and include:

Construct validity is one of the most central concepts in psychology. It is the degree to which a test measures what it claims, or purports to be measuring. Researchers generally establish the construct validity of a measure by correlating it with a number of other measures and arguing from the pattern of correlations that the measure is associated with these variables in theoretically predictable ways.

This technique is regarded as one of the most robust measures of reliability and presents the highest 'bar' from which to compare. The readers should note that Cronbach's alpha is the method selected for this instrument, because of its high standards. The reader is encouraged to compare reliability coefficients presented herein to other vendors, and also to ask those vendors which reliability formulas they used to compute their reliability coefficients. Cronbach’s alpha is a measure used to assess the reliability, or internal consistency, of a set of scale or test items. In other words, the reliability of any given measurement refers to the extent to which it is a consistent measure of a concept, and Cronbach’s alpha is one way of measuring the strength of that consistency.